The popular Dutchman hit five 180’s and recorded a brilliant 107.22 average to see off ‘The Flying Scotsman’, much to the delight of the record breaking Irish crowd.

The tremendous turnout of 9,000 was the highest ever in a PDC event and van Barneveld was delighted to have put on a show, and, more importantly, get the victory. 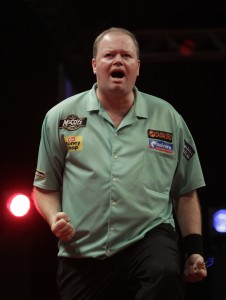 He said: “It felt good out there. It was fantastic to play so well in front of an amazing crowd. Last week I didn’t play too well and won, so tonight I was pleased to win when I had played well. I’m relaxed at the moment and that has enabled me to play the game I know I can.”

The signs of a special performance were evident from the start, as the five-time world champion took out a tidy 109 finish to hold his throw in the opening leg. The Dutchman hit his first 180 in leg two but was unable to stop Anderson drawing level. Van Barneveld hit double top to go back in front before Anderson hit double ten to hold his throw once more. ‘Barney’ won the fifth leg, hitting his second maximum in the process, before grabbing the first break of throw in the match, to take a 4-2 lead into the break.

He made it three legs in a row with a brilliant 120 checkout, before Anderson pulled a leg back despite another 180 from van Barneveld. The Scotsman won the next leg against the throw to put himself back on course for at least a draw, but ‘Barney’ wrestled back control by hitting back to back 180’s in an awesome eleven dart leg.

The pendulum swung back Anderson’s way, when he broke the throw to reduce Barney’s lead to 6-5, but the Dutchman restored his advantage immediately to ensure he would come away from the Emerald Isle with a draw at worst. He sealed the win in the next leg, hitting double sixteen to move up to second in the table.

Barney back to winning ways

‘Barney’ averaged over 103 on his way to victory, in a match where more legs were won against the throw than with it. Painter grabbed a break of throw in the opening leg. ‘Barney’ responded with a maximum before hitting double top to draw level. The Dutchman just missed double sixteen for a 146 finish in leg three, but hit it in his next visit to put himself ahead. ‘The Artist’ hit back by taking out a stunning 157 finish to hold before breaking van Barneveld’s throw to take a 3-2 lead. ‘Barney’ broke back immediately once more to go into the break on level terms.

The second half of the match started in similar fashion to the first, as Painter claimed another break of throw before ‘Barney’ did the same, hitting another maximum in the process. The five-time world champion hit his third 180 in the ninth leg, which he won by hitting double 18. ‘Barney’ then closed in on victory when he hit double eight for another break of throw.

The pendulum briefly swung back Painter’s way when he hit double fifteen to break van Barneveld’s throw, but ‘Barney’ broke straight back once again to leave himself throwing for the match. He completed the job by hitting double 16, much to the delight of the Glaswegian ‘Barney Army’.

“I cherish the two points, I’m happy tonight,” said van Barneveld. “Kevin Painter is a world class player so I’m pleased to get the win. He will be disappointed, as I would have been if I’d lost tonight, but he’ll be back next week. I’ve been working hard, practising and working out in the gym. I am tired but I cherish every moment and if I need to climb a mountain to win games, I will do it.”

Barney fights back to beat The Hammer

Raymond van Barneveld produced a stunning fight-back to claim an 8-6 victory over Andy Hamilton in Exeter. ‘Barney’ won the last four legs consecutively to seal the win, hitting five 180’s in the process. The Dutchman has been in fine form in the first few weeks of the McCoy’s Premier League season and is delighted to be silencing his critics.

He said: “Since I got the wildcard for the Premier League I wanted to prove those people who said I didn’t deserve it wrong. I changed my attitude, I’ve got a good team around me who believe in me and I believe in myself. Andy played well; his finishing was fantastic so I’m happy with my first win.”

‘Barney’ hit his first 180 in the opening leg, which he won before Hamilton levelled. ‘The Hammer’ then broke the Dutchman’s throw and promptly took a 3-1 lead. Van Barneveld held his throw before Hamilton did the same, despite ‘Barney’ hitting his second maximum.

The five-time world champion hit double eight in the first leg after the break, to reduce Hamilton’s lead to 4-3. ‘The Hammer’ restored his two leg advantage by holding his throw before ‘Barney’ hit double ten to stay in touch. The 2012 World Championship finalist hit double top to edge further in front once more. ‘Barney’ then threw five perfect darts at treble twenty for the second time in the match, before hitting bull then double 16 for a sensational eleven darter.

Still needing a break, at 6-5 down, van Barneveld turned up the heat on his opponent. The Dutchman hit his fourth 180 before hitting double nine to reach parity. He then held his throw to seal at least a point, hitting his fifth maximum in the process. ‘Barney’ completed the comeback by hitting double eighteen to break again, and grab his first win of the season.