Raymond van Barneveld kept himself firmly in the hunt for a McCoy’s Premier League semi-final spot with a draw against Andy Hamilton in Liverpool.

The five-time World Champion fought his way back from 4-1 down to grab a point, although it could have been an even better comeback for ‘Barney’, who missed two darts at a match-winning double.

He said: “Andy is a fantastic player, every time I play him he makes it hard for me to win. I didn’t play my best tonight so I was happy to get a draw.

“I’m still very much in with a chance of making the Play-Offs and of course I think I can do that.”

Hamilton won the first three legs, taking out a brilliant 152 finish in the second, before ‘Barney’ got a leg on the board when he hit double ten. 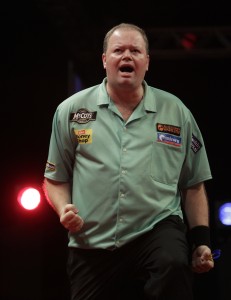 ‘The Hammer’ hit double top to take a 4-1 lead but van Barneveld cut his lead in half with a tidy 76 checkout.

The Dutchman hit double 16 for a crucial break of throw. He then held his own throw to draw level, before just missing the second treble on a 164 finish. Hamilton capitalised and edged back in front before ‘Barney’ replied by hitting his first 180 on the way to squaring up at five legs apiece.

Hamilton held again before van Barneveld did the same, hitting double top for a neat 82 finish under pressure.

‘Barney’ put himself in a good position to win the match by hitting a 180 against the throw, but was made to pay for two missed darts at double twelve, as Hamilton guaranteed himself a point.

Van Barneveld made sure he claimed a share of the spoils by hitting double top.

Double Delight for Barney in Barnsley The resurgent Dutchman beat Ian White 6-2 in the final, to claim his second title in as many days, having won the fifth qualifying event on Saturday.

Van Barneveld had trailed his opponent 2-1 before taking five consecutive legs to clinch the £6000 prize money. That, combined with the £6400 he collected for Saturday’s triumph and nine-dart finish, moves ‘Barney’ back into the top eight in the PDC Order of Merit.

“Not many players win both tournaments in a weekend so I’m really proud,” said van Barneveld, who has been enjoying something of a revival in 2012.

“That says a lot about the kind of player you are; I’m working out now in the gym, I feel fit, I feel awake and I feel confident.

“The first couple of games I wasn’t pleased with but after that I gained confidence and the rest of the day was awesome. I’m really pleased to have won both finals.”

‘Barney’ will be hoping to take this kind of form to Bournemouth on Thursday, where he faces Simon Whitlock in the McCoy’s Premier League. The popular Dutchman beat Andy Smith 6-3 in the final to clinch his first Pro-Tour triumph since last September, earning himself £6000 in prize money for the win, plus a £400 bonus for his perfect leg.

That nine-darter, his ninth since joining the PDC, came in a third round success over Michael Barnard, after he had already seen off Sam Hill and Mareno Michels.

The five-time world champion then overcame the challenges of Simon Whitlock and Brendan Dolan in close encounters, winning both games 6-5 to progress to the semi-finals.

‘Barney’ beat Terry Jenkins 6-4 to reach the final, where he sealed victory over Smith with an impressive average of 102.74. The Dutchman ended a successful day in style by hitting a 117 checkout in the winning leg.

“I’m very happy with the win,” said van Barneveld. “It was a tough day and it was a good final against Andy.

“I had some tough games but I believed in myself today and I’m really pleased. I was 3-0 down against Simon Whitlock and came back to win, I had a marvellous game with Brendan Dolan and I was 4-3 down against Terry Jenkins and won.

“In January I said I was going to play more tournaments on the floor and these tournaments are really hard to win so I’m happy today. I’m really pleased with the nine-darter. I’m working hard and it’s paying off.”

‘Barney’ at his brilliant best in victory over Painter

Raymond van Barneveld produced his highest ever televised average to see off a late fight-back from Kevin Painter, as he clinched victory at Nottingham’s Capital FM Arena. The popular Dutchman averaged over 112 and hit an incredible 15 140’s in the triumph, which puts him on ten points after nine weeks of action.

“I played well, but I was still made to work for the win,” said van Barneveld, who faces Phil Taylor next week. “I had to hit that double ten at the end. That was more important than the average. The average is nice but was just a bonus.

“Everyone has a chance to qualify for the playoffs. It’s the closest Premier League we’ve ever had but I want to make sure that I’m one of the other three players that make it, along with Phil.”

‘Barney’ got the upper hand immediately, hitting double eight to take the first leg against the throw before doubling his advantage with a neat 84 checkout. Painter pulled a leg back before the Dutchman took out 81 in clinical fashion, to hold his throw and go 3-1 ahead.

Painter hit back again by winning the fifth leg, but van Barneveld responded with his first 180 before hitting double eighteen, as he headed into the break with a two leg lead.

The five-time world champion picked up where he left off after the interval, opening leg seven with his second maximum before taking out 100 in two darts to break his opponent’s throw.

Painter began to ask questions of ‘Barney’, breaking the throw for the first time to reduce the deficit to 5-3. Van Barneveld had the perfect reply though. He threw six perfect darts at treble twenty and broke straight back.

Van Barneveld just missed the double for a 149 checkout in the ninth leg, but won it nevertheless, tidying up double eight at the first attempt.

Painter kept the match alive by winning the next two legs despite ‘Barney’ upping his maximum count to five. ‘The Artist’ then took out 120 to move within a leg of clinching a draw but van Barneveld crushed his opponents hopes, hitting double ten to wrap up the victory and take his points tally into double figures.