Barney battles for draw but is denied Play-Off place

Raymond van Barneveld narrowly missed out on a place in the McCoy’s Premier League Play-Offs after a dramatic deciding leg against James Wade in Newcastle. 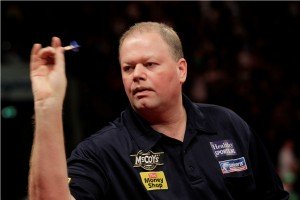 ‘Barney’, who needed to win to take the final Play-Off spot, led 7-6 against ‘The Machine’, who was in need of a draw to qualify.

Wade produced a great leg under pressure to ensure it would be him who made it through, hitting 60, 180, 140 and 81, before hitting double top to set up a semi-final clash with Phil Taylor at London’s O2 next Thursday.

Barney hit his first 180 in the opening leg, which he won on double 16. ‘The Machine’ responded with a clinical 95 checkout, before van Barneveld hit double ten to go back in front.

The Dutchman applied the pressure with his second 180, before grabbing a break of throw in a tense fourth leg, in which both players missed doubles.

Wade broke back immediately to reduce the deficit but van Barneveld did the same, to take a 4-2 lead into the break.

‘The Machine’ grabbed the fourth consecutive leg against the throw, hitting his first maximum in the process.

The world number three then hit double eight to hold his throw and level the match at four legs apiece.

Wade took the lead for the first time, hitting double twelve for another break of throw, before taking out 80 to go 6-4 ahead and in need of one more leg for a Play-Off place.

‘Barney’ produced a sensational 161 checkout to keep the match alive, and he finished on the bull again to restore parity.

Both players missed shots at the bull in the 13th leg, before van Barneveld hit double sixteen, but Wade held his nerve and his throw in the final leg, to book his place in the semi-finals.

Barney thanks The Money Shop for priceless support

Raymond van Barneveld and three more of MODUS’ star players have hailed the role of sponsors The Money Shop, after a successful start to 2012.

Barney, James Wade, Simon Whitlock and Paul Nicholson are all enjoying the support of UK’s number one instant cash provider, and have all spoken of their gratitude and pride in sporting the company’s logo.

The players have been repaying their sponsor for putting faith in them by proudly showing off the logo, as well as making personal appearances at various branches around the country.

Whitlock has enjoyed a particularly strong few months, having already qualified for the semi-finals of the McCoy’s Premier League. ‘The Wizard’ highlighted the importance of the partnership.

He said: “Sponsorship is such a massive thing for darts players. When I hit the top a couple of years ago, I was struggling for sponsorship, so to have such a well known brand like The Money Shop onside is absolutely fantastic.

“I hope my performances are repaying their support and I am pleased that I will be showing them off on my shirt in the Premier League semi-finals.”

Wade and van Barneveld are both still in strong contention to reach the Premier League Play-offs and the pair both paid tribute to their sponsors, ahead of their crucial showdown on Thursday. 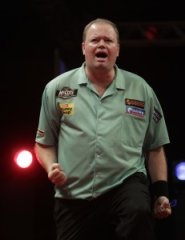 “The Money Shop has been brilliant,” said van Barneveld, who appeared at the Birmingham Store last week. “I am pleased to give something back when I visit them and meet their staff and also with my performances on TV.”

Wade added: “It will be a tough match next Thursday. Both Raymond and I are desperate for a place in the semis, not just for ourselves but everyone who supports us. Our sponsors put a huge amount of faith in us, and we want to do well for them too.”

Nicholson reached the final of the World Cup of Darts, when he and Whitlock represented Australia earlier this year. ‘The Asset’ is hoping that was just the start of a good year ahead in major tournaments.

“I really want to win a TV tournament this year,” said Nicholson, who is appearing at the Metrocentre store, Gateshead on Wednesday.

“Simon and I were so close in the World Cup but it wasn’t to be. But I’m getting closer and the brilliant backing from The Money Shop can only help me move forward. They believe in me as much as I believe in myself and I can’t thank them enough.”

Raymond van Barneveld took the race for the Play-Offs into the final week, after he earned a draw against reigning McCoy’s Premier League champion Gary Anderson in Birmingham. Van Barneveld hit a stunning maximum checkout of 170 in a high quality encounter against the world number three, as he grabbed a share of the spoils at the NIA.

“Big finishes are great but at the end of the day they are only in one leg,” said van Barneveld, who also took out 120 in the match.

“I had a couple of them but I didn’t play well enough on Gary’s throw. Next week I will give my very best.

“People at the beginning of the Premier League thought I was finished but I feel I have proved them wrong whatever happens.”

‘Barney’ started in style, producing a brilliant 138 checkout against the throw to win the first leg. He just missed the bull for a sensational 161 finish in leg two, allowing Anderson to level up on double top.

‘The Flying Scotsman’ held his throw to edge in front, before breaking despite van Barneveld hitting his first 180.

The Dutchman’s second maximum came in the fifth leg, as he broke back and reduced the deficit to one leg.

‘Barney’ squared up the match before the break, throwing five perfect darts at treble twenty before hitting double 14 to win leg six.

Van Barneveld grabbed a crucial break of throw in the seventh leg, before increasing his lead to 5-3 with a roof-raising 170 checkout.

Anderson took out 60 and 70 in the next two legs to restore parity, before a neat 64 checkout gave the Scotsman a 6-5 lead.

‘Barney’ hit a brilliant 120 finish to level up before Anderson held his throw to deny The Dutchman a victory.

The five-time World Champion secured a draw though, taking out 60 to keep his Play-Off hopes alive.

Terry Jenkins to shave off moustache for charity

Witness this historic moment when Terry ‘the bull’ Jenkins shaves his moustache for the first time in 33 years on 25th May 2012 @ The Untouchables Charity event in aid of Bradbury Enhanced Care Unit. Many thanks to you all for your kind support.