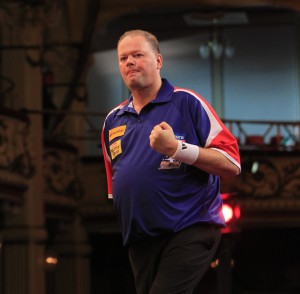 Barney’s astonishing achievements, combined with his likeable persona, have been instrumental in the game of darts becoming popular in the Netherlands.  more Raymond van Barneveld shared a draw with James Wade in Cardiff in the McCoy’s Premier League on Thursday evening.

Wade took out two finishes of over 100, while van Barneveld hit five 180s in a match that had plenty of highlights but the pair could not be separated.

The result sees both players remain inside the play-off places and the Dutch five-time World Champion admitted that luck was on his side.  more Raymond van Barneveld stayed at the summit of the McCoy’s Premier League table after sharing a 6-6 draw with Robert Thornton in Manchester on Thursday evening.

The Dutch five-time World Champion continued his fine form in the tournament and admitted that a draw was a fair result, despite leading 6-4 at one stage. more Raymond van Barneveld sealed a hard fought victory over Andy Hamilton in Nottingham as he grabbed his fourth success of the 2013 McCoy’s Premier League on Thursday evening.

‘Barney’ produced a fabulous eleven darter in the final leg to grab the win after a close battle, in which both players averaged over 100.

And the popular Dutchman feels that he can concentrate on reaching the play-offs after reaching eight points with four win in the opening five weeks, leaving him top of the table. more