0
By admin Posted on February 4, 2012 in Uncategorized

World Cup of Darts: Round 2: The Netherlands 3 – 1 Austria

Raymond van Barneveld and Vincent van der Voort joined forces to produce a solid display as they progressed to the quarter-finals of the World Cup. 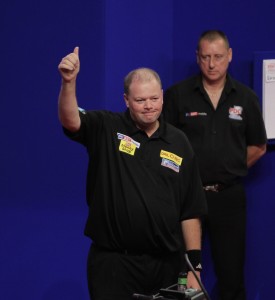 The Dutch pair, defending their nation’s title, saw off the challenge of Austria with apparent ease.

Van der Voort got the ball rolling by hitting double one to win a tense opening leg. ‘The Dutch Destroyer’ then hit double top to move Holland into a 2-0 lead. He then took out 44 to complete an eleven dart leg for the Dutch team.

Mensur Suljovic pulled a leg back for Austria with a 121 checkout before van Barneveld hit double ten to move within a leg of victory. Austria grabbed a lifeline by winning the next leg but ‘Barney’ wrapped up the match with a smooth 76 checkout.

The Netherlands will take on Northern Ireland tonight as they bid to move a step closer to claiming their second consecutive World Cup title.